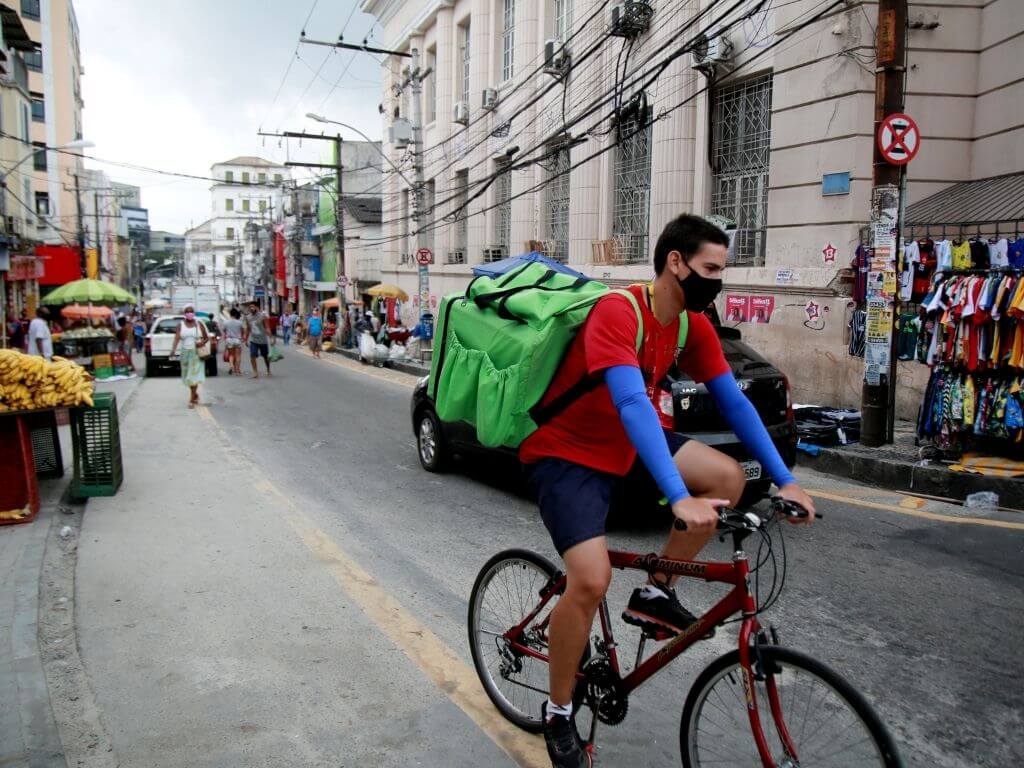 On-demand platforms in Latin America are partnering with banks, fintechs and insurers to deliver integrated financial and e-commerce solutions

Delivery drivers come and go from a structure made of huge containers forming a colorful bungalow, in a trendy neighborhood in Mexico City. Loaded with their square thermal backpacks – the ones that have become so common in major cities around the world – this hub represents the growth of gig economy in Latin America.

This “House” used by the Mexican tech platform Heru is a good example of the needs of an expanding market: as the number of workers in the shared economy grows, so does their demand for commercial, financial and digital services.

“We think that the current workforce is going to start moving a lot more towards the gig economy, regardless of whether it is on demand from companies like Uber and Rappi, or in general,” predicts Stiven Rodriguez, co-founder of Heru, in an interview with iupana.

The Mexican tech platform offers services, provided by partners, for self-employed workers, especially for rideshare and app delivery drivers. The products vary from insurance, tax advice, personal finance management or mobile data plans. And in the offline world, their hubs are used to rest, eat, connect to wifi, or simply wait for the next trip.

“It will be something like this: ‘Next week I’ll want an engineer to work with me on this app or I want a marketing person to help me for two weeks to get this campaign rolling’,” explains Rodriguez, who before being an entrepreneur, worked on Uber’s expansion into cities such as Bogota, Cali and Mexico City. “We think that’s where we’re going, and that’s why these services are going to become much more relevant to people.”

Heru is not the only one thinking along these lines. Similar initiatives are emerging in the region in response to a global market that in 2019 was valued at around USD $204 billion (with transportation services representing 58% of the value); and which is expected to more than double by 2023, to around USD $455 billion, according to Mastercard’s calculations.

It is a new frontier for the gig economy – defined as a group of people who use an app to work – that seemed to have peaked with the boom of shared service apps for ride-hailing or last-mile delivery.

Now, the industry is expanding towards the freelance universe, reaching highly qualified professionals with solutions tailored for self-employment workers, such as medical coverage and financial access.

Financial services for the under-banked

Lana, another startup born in Mexico and taking its first steps in Chile, has opted for a wallet with digital onboarding and Mastercard contactless debit card, especially designed for the self-employed, from professionals to the informal market.

“Unfortunately, the gig economy worker’s profile is one that for traditional or conventional financial institutions is very difficult to monetize, due to the volume of their income, and the instability of that income,” explains Juan Camilo Pineda, co-founder of Lana and director of operations in Mexico.

“We call them under-banked because one of the main requirements for a person to register and work on a gig economy platform is that they have a bank account to receive their payments. They generally use what’s available in the market, but they use this bank as a middleman that doesn’t provide much value, just to go to the ATM and make withdrawals,” he adds.

During the pandemic, they began piloting microloans with grace periods of up to three months, while expanding their marketplace where they also offer social security, retirement planning, and health care solutions.

The region made considerable financial inclusion strides in 2020, partly driven by the COVID-19 shock that prompted people to turn to banks and fintech for digital channels to move their money. But still half of the Latin American population does not have access to any banking services, according to the World Bank.

For players in the sector, the shared economy is a gateway to reach those informal and low-income workers who do not use, or have, financial tools.

The global insurer AXA, for example, has partnered with Cornershop and Uber in Mexico to insure the vehicles of its driving and delivery partners that transport goods and people. The country has many challenges to overcome especially in the insurance market.

Eric Pulido Perrault, deputy director of business development at the insurance company, explains that only 30% of the vehicles in the country are insured.

The low adoption is due to several reasons: limited use of payment methods – such as credit or debit cards – to facilitate recurring insurance premiums, an insufficient sales channel based on insurance brokers, complex products and the general lack of trust towards the industry.

For Pulido this translates into financial vulnerability. The insurance company estimates that every year 1.2 million people fall into poverty because of accidents and lack of coverage.

The policy provided by the platforms is active for the duration of the trips through the apps. The company also offers complementary products to provide coverage when rideshare and delivery drivers are offline, as well as to sign up for virtual doctor’s visits and pharmacy discount plans.

“It is a way we see of working with the Mexican market that traditionally does not have insurance,” explains Pulido, who adds that they will continue to bet on these partnerships to reach this market, which they hope will continue to grow in the coming years.

“You achieve much faster market penetration if you work with partners who have direct access to people in the sharing economy,” he says, adding that drivers can access policies through digital platforms and at the Uber and Cornershop offices.

Other companies agree that collaborations within the ecosystem will continue to multiply.

In fact, Lana was initially intended as a payment platform for drivers enrolled in Cabify. However, their director says that the further they got into the project, the more it became clear to them that their issues cut across the industry.

Ultimately, the Spanish company became a partner of the venture and, together with capital funds such as Base 10 and Cathay Innovation, invested USD $12.5 million last year to support its expansion.

“Many of the companies are leading their way into this financial services boom. … The market is dynamic and on fire,” Pineda says.

Delivery companies, of both food and goods, had a significant surge during the pandemic. Now, the trend is moving toward unification of the system, with companies that transport people also delivering packages and food, and vice versa.

Other verticals will also begin to gain more ground within the app world, such as personal grooming and home repairs, beauty services and pet care.

Meanwhile, on the companies’ doorsteps, sending payments to workers continues to generate friction, and an opportunity for new solutions to be developed that reduce costs and pain.

Most gig platforms are interested in vendor solutions that streamline their instant payment processes and provide options for international transfers, according to the 2019 Mastercard and Kaiser Associates study, because they believe they could increase independent professionals’ satisfaction, reduce operating costs, and attract employees with specific skills, regardless of their target market.

For Raúl De Roa, a gig economy expert and director of a global innovation company, explained that, little by little, large technology companies have begun to recruit personnel through the many existing freelance digital platforms.

“The big leap will happen (…) when companies like Microsoft, Apple, Google, begin to have a really defined policy of gig economy and crowdsourcing, and begin to join platforms of this type in an organized way,” he predicts from Madrid.

“So far, those who are accessing the gig economy in an organized way are individuals, small companies, or the companies themselves, such as Deliveroo or Glovo; but the rest do not access much because of the risks in social responsibility, security, ethics, legal. They have to structure it and plan it. Once they do that, it will skyrocket big time.”

Governments in the United States and Europe have begun to look closely at applications, establishing minimum rules for their participants. Companies also fear the reputational and cost risks that can result from employing temps without establishing clear rules.

Nonetheless, as the conversations continue, hiring is growing.

Roa says that a couple of years ago he worked on the creation of a “meta crowdsourcing” solution for a major technology company, which he preferred not to name. Based on the requirements of the project, the volume of work and the number of people to be required, the company used an automated search engine with APIs, which grouped together more than 200 freelance platforms.

The search could be used to cover positions as varied as designing a logo or a robotics and Artificial Intelligence project, or as specific as temporarily enrolling “1,000 software testers, over 65, French and who have an iPad”.

“The data we recently handled is that in Latin America, specifically Mexico, Argentina, and Spain, the number of IT experts in the gig economy has grown between 60% and 70%. It is growing in a dramatic way, and with COVID-19, even more so,” he says.

The shortage of professionals is clear in areas such as design or cyber security, interviewees agree. Self-employment portals such as Upwork or Fiverr are helping to meet these gaps.

“This (market) has to be democratized, right now it’s in its early stages, it’s quite young, but it’s growing very fast,” says De Roa.

“We need to pull a lot from the gig economy, to do robotics projects, AI, and immersive spaces. We don’t see it as covering a gap, we see a gig as extended workforce: a way to extend your workforce, without extending the number of employees”, he adds.

This article is part of a special series on digital finance in partnership with Mastercard. Explore the full series here.