Beyond an account: The challenges of financial inclusion in Latin America 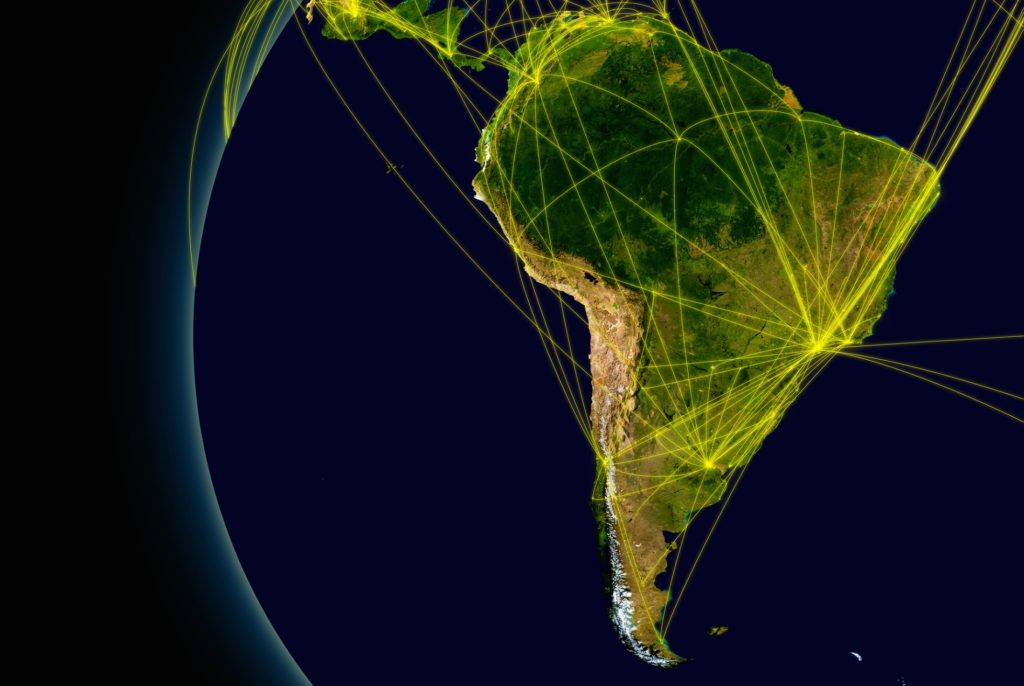 Latin America has made extensive progress in increasing access to finance in the last year, but there are still many areas that could benefit from digital solutions and collaboration

When COVID-19 unexpectedly knocked on the door of Octavia Perez, a domestic worker in busy Mexico City, one of her first concerns was how she would be able to manage her income.

Like billions of people around the planet in countries with emerging and informal economies, Perez lost the ability to go to work every day and access her wages, usually paid in cash.

The solution came in the form of quasi-banking: using her sister’s account to receive transfers from her employers, which she would then withdraw as cash.

“I had an account before, but I didn’t know how to use it,” says the 39-year-old employee. “I left money in there and didn’t take it out for months because I didn’t need it. When I got back, they told me I didn’t have a penny. I don’t know what happened, but I was disappointed,” she adds, shrugging her shoulders.

Driven by the shock of isolation, millions of users in Latin America and the Caribbean needed to access banking tools remotely and digitally, many for the first time. And on the other side, the providers of these services, such as financial technology entities and companies (fintech), rushed to create solutions to serve a market with new expectations and demands.

However, most of the region is still not meeting its inclusion goals, which is forcing companies to rethink strategies, to go beyond simply opening accounts and to focus on generating savings and investment products, areas that will be much more necessary in the years of economic hardships to come.

“What is the real definition of financial inclusion? It doesn’t mean that a person has a bank account… it really is that a person has the ability to put money somewhere, to be able to manage that money, like to weather a difficult moment” – Federico Gomez Shumacher, PayPal

About half of the population in Latin America has no access to financial products, according to the World Bank. And some 45 million people in the region will fall into poverty by 2020, according to numbers from ECLAC, the United Nations’ division for Latin America. In total, about 230 million people (37.3% of the population) will be added to the group of those living on less than $10 a day, taking the region back decades.

In this environment, the adoption of a new concept of inclusion is growing – digital financial inclusion. It’s the result of synergy in new collaborative ecosystems, where the different players learn from others – such as traditional banks from fintechs, or lenders from neobanks – to develop tools with optimum UX.

“What is the real definition of financial inclusion?” asks Federico Gomez Shumacher, PayPal’s general manager for Latin America.  “We should really all be in agreement that it doesn’t mean that a person has a bank account… it really is that a person has the ability to put money somewhere, but at the same time be able to manage that money, like to weather a difficult moment.”

“We believe that that the only way to achieve this is with partnerships (…) We also strongly believe that democratizing financial services has to be done with a strong level online, because we’ve seen for many years that if this had to be physical infrastructure, financial services in every single place around the world is just not feasible. But now, potentially everybody has a branch in their pocket, with a mobile phone,” he added, as part of his remarks at the Latin America’s Fintech Revolution Symposium held by the Council of the Americas (COA) and sponsored by Mastercard.

Public and private partnerships for inclusion

Digital inclusion comes from taking advantage of the convenience of increasingly widespread access to the internet to attract and engage users, through content and products that help them in their daily lives and add digital skills and financial education.

During the onslaught of the pandemic, the potential of digital media to reach users became clear, in a region with nearly 70% smartphone usage, according to GSMA, the global mobile network association.

“This move to digital is here to stay, for the long haul, and it is impacting not just the world of commerce, is also driving advances in transformation, it’s forcing collaboration with fintech and it’s also allowing new players to compete, so all of this is pointing towards the opportunity that we have in digital,” says Kiki Del Valle, senior vice president of digital partnerships, Latin America and Caribbean, at Mastercard.

About 40 million people entered the financial system in Argentina, Brazil and Colombia alone, in a frantic five-month period between April and September, according to a study conducted by Mastercard and Americas Market Intelligence (AMI).

And most of this population accessed these services through digital channels.

“Thanks to social benefit programs during Covid the unbanked population in all of Latin America will have been reduced by 25%,” added del Valle, one of the report’s authors, at the COA’s digital forum.

Although government incentives at the beginning of the pandemic were key to making the migration from cash use to online and recurring services, the prompt response of banks and fintechs was just as important, and in many cases provided the tools to deploy platforms in record time and capable of enrolling people remotely.

In fact, Mastercard recorded a 40% increase in its partnerships with fintechs during the year, Del Valle said.

Colombia served almost 19% of its population with emergency aid distributed first through bank accounts, and then with electronic wallets from banks and fintechs such as Daviplata, Nequi and Movii, reaching 1.5 million people outside the system.

The Brazilian Government, on the other hand, introduced the “coronavoucher” program for low-income informal workers, distributed through the mobile application of the state bank Caixa Econômica Federal (CEF). The impact was tremendous.

The study recorded that by early August, 66 million people had received the grant. Of these, some 36 million had no bank account.

According to Del Valle, in the first months of the programs’ implementation almost all the beneficiaries withdrew the funds to convert them into cash.

However, as the dynamics of social distancing became established and users discovered new capabilities in their applications, the trend began to fall, with people using the tools for e-commerce shopping, transfers to friends and family, and payments for essential products and utility bills, such as water or electricity.

“[Fintechs have] a very different business model, they can do a credit check in literally minutes and disperse the money in seconds. That is not what we were used to in commercial banks, and that’s very important for people. They can do it at a distance,” said Luis Alberto Moreno, former president of the Inter-American Development Bank, as part of his participation in Reignite, the Mastercard LAC Innovation Forum, held in November.

To drive the continued adoption and use of financial solutions, payment providers are developing smart products with a customer-centric approach, taking into account customer habits, preferences and needs.

They also continuously interact with them to get to know them and provide real solutions for everyday life, whether it’s expediting payments or offering virtual personal finance assistants to meet a specific goal.

“This move to digital is here to stay, for the long haul, and it is impacting not just the world of commerce, is also driving advances in transformation, it’s forcing collaboration with fintech and it’s also allowing new players to compete” – Kiki Del Valle, Mastercard.

Here, the opportunities to apply exponential technologies are abundant. The use of artificial intelligence (AI), to track expenses and determine a person’s capacity to pay for financing, or the adoption of blockchain in loans for small and medium sized companies seeking to internationalize, is growing.

Open banking, which is beginning to make waves in the continent, will introduce competitiveness – and at the same time cooperation – that can be applied in offering white label financial products to be consumed from a retail store app, an insurance company or a social network. Data, collection and analysis, will become especially relevant in this context.

The Argentinean retail giant has been adding features to their electronic wallet with the intention that their customers will not need cash and can make purchases with QR codes, pay bills or even invest in funds.

“With all this information we enable customers to build a payment history and we can use that to offer them a loan …. We can provide credit in shorter lifespans and with shorter feedback cycles, using information that probably are available in real time,” the executive continued at the COA symposium.

Achieving a balance between convenience, effectiveness and safety is also a must. Ultimately, it is about the users’ trust, their resources and their information.

“We need to provide consent, transparency, we need to understand the data ownership, and also ensure that the information is secure and it’s driving inclusion, which is obviously a hefty goal that we all have across the system,” says Del Valle.

For this, the technology offers biometrics, one-time passwords and tokenization, which allow transactions to be made by turning card data into codes associated with a transaction and not with a main account, and to reinforce static passwords.

This whole set of innovation opens the possibility of developing specific solutions, for specific times and needs, for example, to try to close the gap of inclusion between men and women, especially those who have informal jobs, like Octavia Perez.

According to the World Bank, women make up 57% of people globally who do not have access to financial products.

“We have seen tremendous innovation in times of hardship, and across Latin America we have tremendous opportunity,” says Del Valle, of Mastercard.

“We must ask ourselves, how you build a product that meets basic human needs? How do you actually drive segmentation and build a product, for example, that is better suited for women who are underrepresented today and drive education and training while you are also pushing for digital tools and solutions.”

What makes a successful partnership? And how can fintechs take advantage of such opportunities? You’re invited to hear a discussion these issues with Murilo Menezes of Juvo, Paolo Fidanza of Mo Tecnologías, and Thiago Dias of Mastercard, in a webinar held on Tuesday, December 2, 2020. Register here.