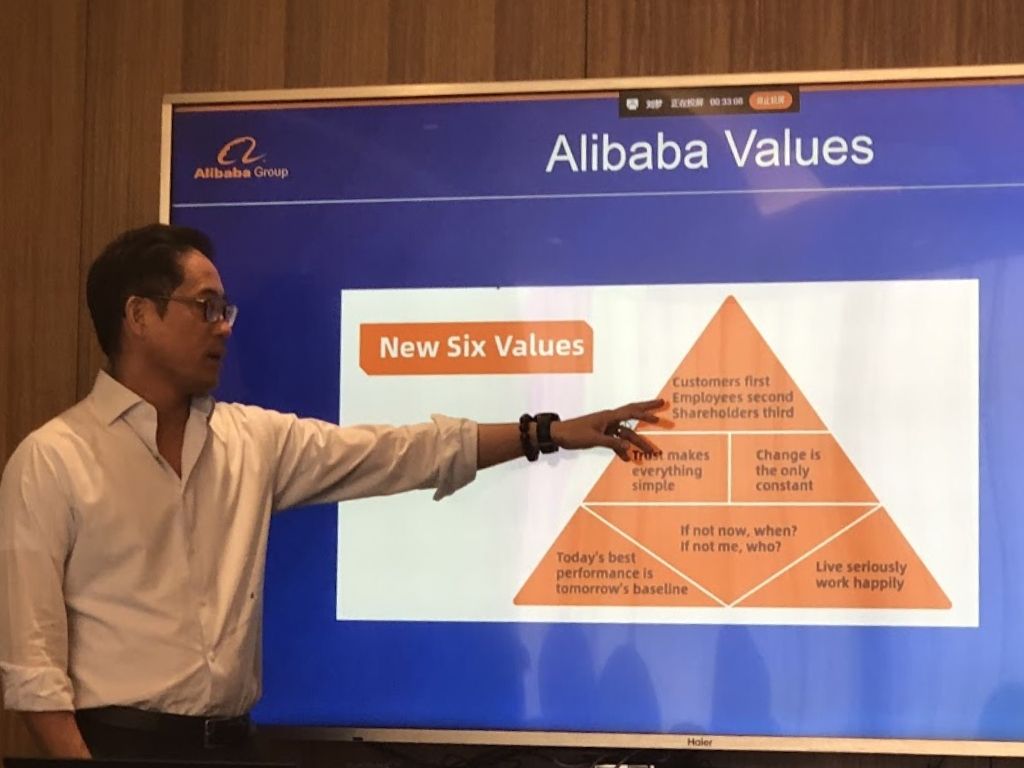 With a QR code, you could pay for everything, immediately: taxis, street shopping… even to give change to the few people we saw asking for money. It was as if they had never adopted the habits that are so normal for us in the west: you could barely buy anything with a credit card – and even less cash was accepted. It was another world, another era. I felt like I’d arrived in the future.

Our trip to China as part of a tour organized for Endeavor’s fintech entrepreneurs was really a surprise for everyone. It started out very standard: the first thing we did when we arrived on Sunday was to visit the Great Wall on the outskirts of Beijing. Those of us who went that day were pretty sure it was the Chinese tourist attraction that we’d always imagined. Our guide had organized a lunch as well that included some great rice, unfamiliar vegetables, and sweet and sour pork.

The wall was full of tourists, most of them from the US, wearing shorts and taking photos on their phones. But the surprise was that they could not upload them to Instagram, nor could they send them on WhatsApp. These platformas are not allowed by the Chinese government. I also learned that day that you can’t use Facebook, Google and some others, too. Nonetheless, we saw the locals glued to their phones, sending and receiving messages and photos – all through Chinese platforms.

That was our first lesson about China’s technological development.

Monday came and we started our trip across Beijing to visit the first fintech company that would meet us. We passed absolutely modern buildings, with brand new architechture. In the space of 30 minutes, we took photos of curved buildings, smooth surfaces and a lot of glass. These buildings, and the impressive highways we were on, had been finished not long before by Chinese engineers and construction companies.

In our first meeting room on Monday, we were greeted by the CEO of a company that offered digital credit and investment management services via cellphone, directed at Chinese consumers. He seemed young, around 40, and well-dressed in luxury clothing – but he had clearly spent the previous night working. Still, he was smiling and proud to share his story with us, visitors from the West. 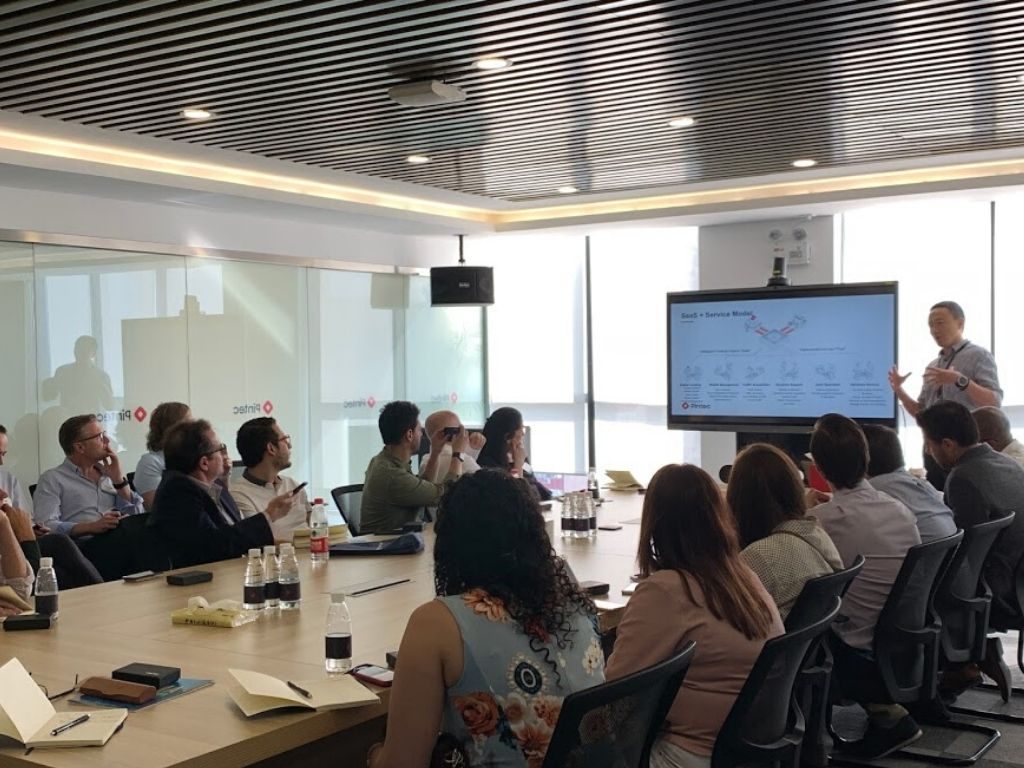 He told us that his company specialized in using artificial intelligence to manage risk, predict behavior, profile users with intelligent marketing, increase recovery and make continual process improvements to ensure convenience and made-to-measure solutions for each client.

He also told us that most of his employees were data scientists and young programmers who had extraordinary abilities to manage massive volumes of information, and all newly trained at Chinese universities. He ended by telling us that in the previous five years, his company had grown exponentially and that their scale was working because every time they put out a new app more than 50 million people would download it.

What’s interesting is that by the end of the week, after meeting with 14 companies in their own modern meeting rooms with designer furniture, we discovered that these three statements were virtually exactly the same as those of the CEOs of the other companies we visited. In each case, this pattern was repeated.

Over the week of conversations, talks and bullet train rides at 350km/hour, I came to understand how the Chinese Model of fintech arose. I realized that, on one side, the Chinese Communist Party, which has been in government since 1949, made a clear decision some years ago to point the country towards becoming a leader in the use of artificial intelligence. To achieve this, it made sure that the universities trained data engineers and systems engineers, and that companies had enough space to innovate in business models that would depend on information that could be extracted from that data.

The government allowed regulation related to the use of personal data to be relatively light for a while, as these scalable business models were developed. It offered resources and incentives for companies and entrepreneurs that innovated in this area. And it encouraged citizens to become users of digital financial services through their cellphones – as long as they were using Chinese apps.

On the other hand, banks allowed the innovation to take place. But, how is it possible that the banks opened up that space? That’s what I asked myself at the beginning of the week, bearing in mind that the world’s biggest banks are Chinese. I concluded that the banks themselves understood that through developments created by fintechs, they could use their balance sheets and banking licenses to fund operations to clients using these new technologies. They also turned to these transactional innovations in partnership with fintechs, to on board new banking clients. And we shouldn’t forget that these banks are heavily influenced by the government – so they paid attention to the country strategy set out by the government.

The Wednesday was perhaps the most surprising day for me. We went from Shanghai to Hangzhou to visit the business campus of Alibaba Group. That includes Alibaba (like Amazon, but bigger), TaoBao (like eBay, but bigger), and Ant Financial (the world’s most valuable fintech, which offers a digital wallet, digital payments, digital investment management, digital insurance, credit scoring, biometric identity, and cloud services for financial institutions, among other things.)

On the campus there were blocks and blocks of buildings, parks, restaurants, shopping centers, corner shops, electric scooters, bikeshares, gyms – all kinds of facilities for the group’s employees. The campus is so big that at one point I got separated from the group… but I was quickly rescued by one of the chaperones who had noticed I was missing – and being off-agenda was not allowed! 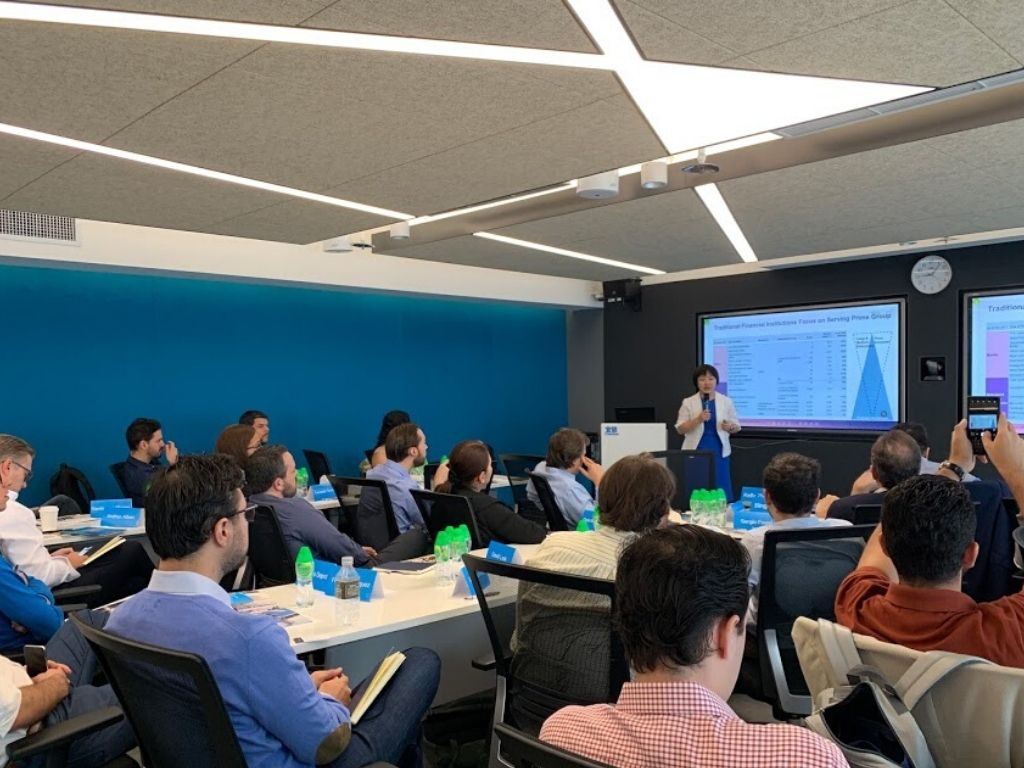 The visit to Alibaba allowed me to understand better the culture that’s supported in part the speed of China’s digital development. In the Alibaba campus, there’s a company museum that highlights the life of Jack Ma, the company founder. Everyone has heard of the legend that says that he was an English teacher earning $20 a month in 1999, but that through a tireless work ethic and unimaginable perseverance, Ma managed to make himself an icon of social mobility and Chinese business achievement. Now, he’s a major reference for middle class workers who want to take advantage of the opportunities that technology and growth can offer. Today, China’s working culture demands workers stick to what’s know locally as 996: that means you work from 9am to 9pm, six days a week. They only rest on Sundays.

We finished our Fintech Tour in China on a Friday. Feeling a little awkward thinking about the 996, I nonetheless took the Saturday off and visited Shanghai’s urban development museum. It was clear that they have a detailed plan so that, in the next 30 years, Shanghai and other Chinese cities will remain at the vanguard of modernism and development.

I’m sure it’s not just fintech where the Chinese will show us the road to the future.

What are the takeaways for a LatAm Fintech CEO?

The company that I run today is a fintech that specializes in point-of-sale financing. We’ve built a digital solution to allow a buyer to defer their immediate costs, and pay their purchases off over time. In recent years, we’ve achieved traction and visibility in our market, and we believe we have a lot of potential.

The visit to China with Endeavor confirmed, in spades, the immense opportunities ahead for a company like ours. So much so, that on the flight home I felt compelled to consider a more ambitious project than what I had originally dreamed of, in an effort to follow the Chinese example.

However, when I arrived in my home airport and sat in the car to drive home, I saw our infrastructure, our buildings, our environment. “Is it possible to execute at the Chinese level on this side of the world, when you see that our characteristics are not the same as theirs,” I wondered.

I thought that our countries have less discipline, less scale, and fewer highly trained engineers ready to work. And that our governments have not been so explicit in supporting these initiatives. And the banks are still working out whether they are friends, or not, of the region’s fintechs. A few days after getting home, I saw how many of our young people are busy marching in the streets to demand changes (something they don’t do in China, only in Hong Kong!) and I got the impression that 996 would be very difficult here.

It’s our responsibility, as fintech entrepreneurs, to heed the call that comes from this great fintech opportunity on our side of the world. But we also have to understand how we can leverage our own habits, and our own reality to create solutions that are made for us. We have to create our own future. Does that mean that we’ll have to work every weekend? I hope not.

Kenneth Mendiwelson (Instagram: @kennethmendiwelson), is the founder of Refinancia/Referencia. He travelled to China as part of Endeavor’s Fintech Tour

5 November, 2020
LatAm fintech insights
Get the scoop on how your peers, competitors and clients are using fintech to get ahead. Leave your details to receive iupana's exclusive, in-depth coverage of banking technology in Latin America and the Caribbean in your inbox on Monday mornings. (You can unsubscribe in one-click if you decide it's not for you.)
Webinars on-demand
You may also like