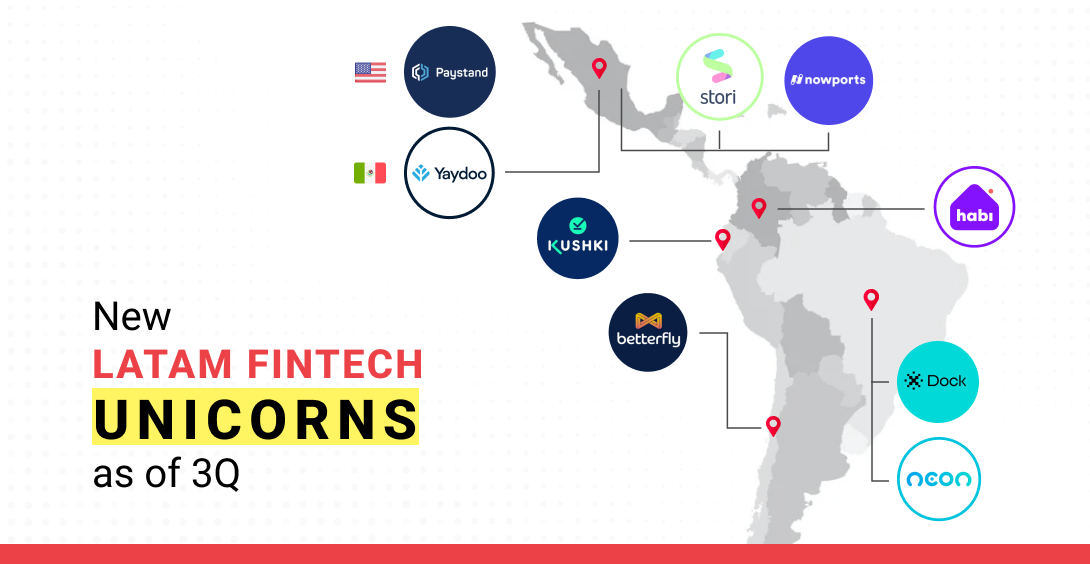 The pullback in investment and a collapse in valuations has made the birth of fintech unicorns an increasingly rare event in Latin America.

Last year, 18 startups achieved a valuation in excess of US$1 billion and half of these were fintechs, according to LABS, a news and analysis website backed by Brazilian fintech EBANX. And so far this year, eight fintechs have become unicorns but, in a sign of how investor appetite has diminished, only two of them achieved this valuation in the second half of the year, according to data complied by iupana.

This decline, together with the absence of investment mega-rounds, dims the prospects of new unicorns emerging in the remaining weeks of 2022. And the outlook for 2023 isn’t very encouraging either, given the latest global economic data.

“Next year is going to be very difficult. I don't think we are going to see many more unicorns created,”  Jonathan Whittle, co-founder and managing partner of Quona Capital, tells iupana. “This is not necessarily a bad thing. Good companies are probably going to be able to finance what they need,” he adds.

While super valuations look good in the press, a fintech that creates real value for users will always be seen as an opportunity by investment funds, Whittle says.

Last year, many companies raised more cash than they actually needed, and their budgets this year are more realistic, he says.

Quona Capital has just closed a US$332 million fund, of which around US$115 million will be invested in new LatAm fintechs in the coming months. The company is more interested in businesses that are looking to integrate into embedded finance models and is less keen on more mature verticals such as neobanks and wallets.

“Good companies are going to get financing. Unicorns? I don't think we'll see many, simply because we're in a difficult market situation and I doubt that will change in the next year,” says Whittle.

We have compiled this chronological list of the fintechs that have been valued above US$1 billion so far in 2022 in order to help you follow the evolution of the new LatAm unicorns.

You may also like: 2022’s largest fintech investment rounds to date

Chilean insurtech Betterfly became a unicorn in February after a US$125 million Series C fundraising led by Glade Brook Capital.

Its A and B rounds raised US$17.5 million and US$60 million, respectively.

The company, which was founded in 2018 by brothers Cristóbal and Eduardo della Magiora, counts QED Investors among its main investors. This year, it announced its expansion to Spain.

Brazilian neobank Neon passed the US$1 billion valuation after BBVA invested US$300 million in the company in February. The financing corresponds to Series D.

Neon continued to expand its ecosystem of products this year. It entered the insurance market and also acquired local lending company Biorc in order to obtain a license to offer loans. General Atlantic has also invested in the neobank.

The Colombian proptech Habi drummed up US$200 million in a series C fundraising in May that was led by Homebrew and Softbank. The injection of capital pushed its valuation over the US$1 billion mark.

The firm launched its fintech arm Habi Credit a few months ago with the aim of facilitating access to mortgage loans for customers buying real estate on its platform.

Since its founding in 2020, Habi has raised a total of US$315 million. In June, it obtained a US$75 million line of credit to help finance its growth in Colombia and Mexico.

Dock, a company that develops financial technology for banks and fintechs, achieved unicorn status in May after raising US$110 million in a round led by Lightrock and Silver Lake Waterman.

The firm, valued at US$1.5 billion, said the fundraising proceeds would be used for the development of new products and to advance regional expansion plans. Five months later, however, the panorama changed.

Last week, the company was reported to have fired 12% of its team members — 160 in Brazil and 30 people in Mexico — after it failed to reach targets.

Nowports also reached a valuation of $1.1 billion in May. Dedicated to digital solutions for international cargo transport, the company closed series B and C rounds for US$60 million and US$150 million, respectively, over a six-month period.

The financing was led by Softbank and Tiger Global, while Foundation Capital also participated.

Nowports told iupana about its plans to offer its clients credit solutions in addition to creating a venture capital fund for the region.

This year, Ecuadorian payments fintech Kushki extended its series B round by US$100 million in June, bringing the fundraising total to US$186 million and making it the country’s first unicorn.

The company was founded in 2017 by Aron Schwarzkopf and Sebastián Castro and counts Kaszek Ventures and Softbank as investors.

This year, the firm entered the Peruvian market to compete in payment processing.

Stori, a credit card fintech in Mexico, raised US$150 million in July and reached a valuation of US$1.2 billion. The fundraising consisted of a series C-2 round for US$50 million and a credit line of US$100 million from the investment firm Davidson Kempner.

The fintech, founded in 2018 by Marlene Garayzar and Bin Chen, offers credit cards to Mexicans with no credit history, a market where Nubank is a key player.

Lightspeed Venture Partners and General Catalyst are among the investors backing Stori.

The merger of payment fintechs Yaydoo from Mexico and Paystand from the United States in August pushed their joint valuation above US$1 billion.

Company executives said the firms will continue to operate independently. A few weeks ago, Yaydoo acquired Oyster, a Mexican digital platform that recently turned its business model toward payment solutions for SMEs.

You may also like: Friday Briefing: From Proptech to Fintech